The beautiful location in Bačvice, above the legendary city sandy beach, the view, the atmosphere and the good cuisine. All this adorns Zora Bila, one of the most attractive restaurants in Split. And you certainly won’t go wrong if you choose it for lunch or dinner. Until recently, it was a place of carefully designed and creative dishes and a rich author’s menu of the cooking couple Sandra and Dana. Because of the pandemic, they had to adapt to new conditions and the market. As in the last year food delivery became their daily routine, they simplified the menu and adapted it to a wider audience. And, to some extent, they lost that prestigious stamp with which they enchanted real connoisseurs with their brilliant dishes. However, what is still recognizable is the very good cuisine, the sense for the ingredients, and the combination of traditional and international cooking. Prepared according to the classic recipe, with vegetables and chicken, the Ajngemahtec soup was very tasty, and even better was the green Bouillabaisse, their signature dish, a dish in which spinach is added to traditional fish soup and blended all together, which gives a completely new freshness to the dish. We noticed that in the shrimp salad the arugula leaves were too big (which would never have happened before), but the salad was from the garden, what is certainly better than artificial arugula from some big mall. The porcini risotto was flawless. Perfectly cooked, al dente, but at the same time creamy, with the smell and taste of the noble mushroom. Then we ordered chard meatballs with fried potatoes and we had the impression that the dish is adapted to a new market demand and especially to the younger audience prone to fast food. Everything we have stated is visible in the total amount of the bill, which is now more accessible and acceptable to guests. All in all, Zora bila is still a top restaurant in a wonderful place, with great cuisine at lower prices. But we are convinced that with their incredible culinary skills and their exceptional creativity, Sandra and Dane, who were awarded with last year’s Gault&Millau Trophy of the Great Chefs of Tomorrow, will soon enchant us with some new dishes. 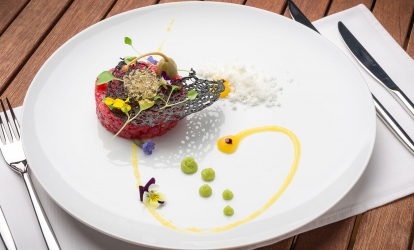